(I had taken a hiatus from the blog due to a hectic work schedule leading up to Soulstice. I just happened to notice that this post will be the 300th blog about Flagstaff Trail Running. )


My 13th year of directing the Soulstice Mountain Trail run proved to be the luckiest and most pleasant yet. (See Myles Schrag's Arizona Daily Sun coverage for a complete recap of the run.) 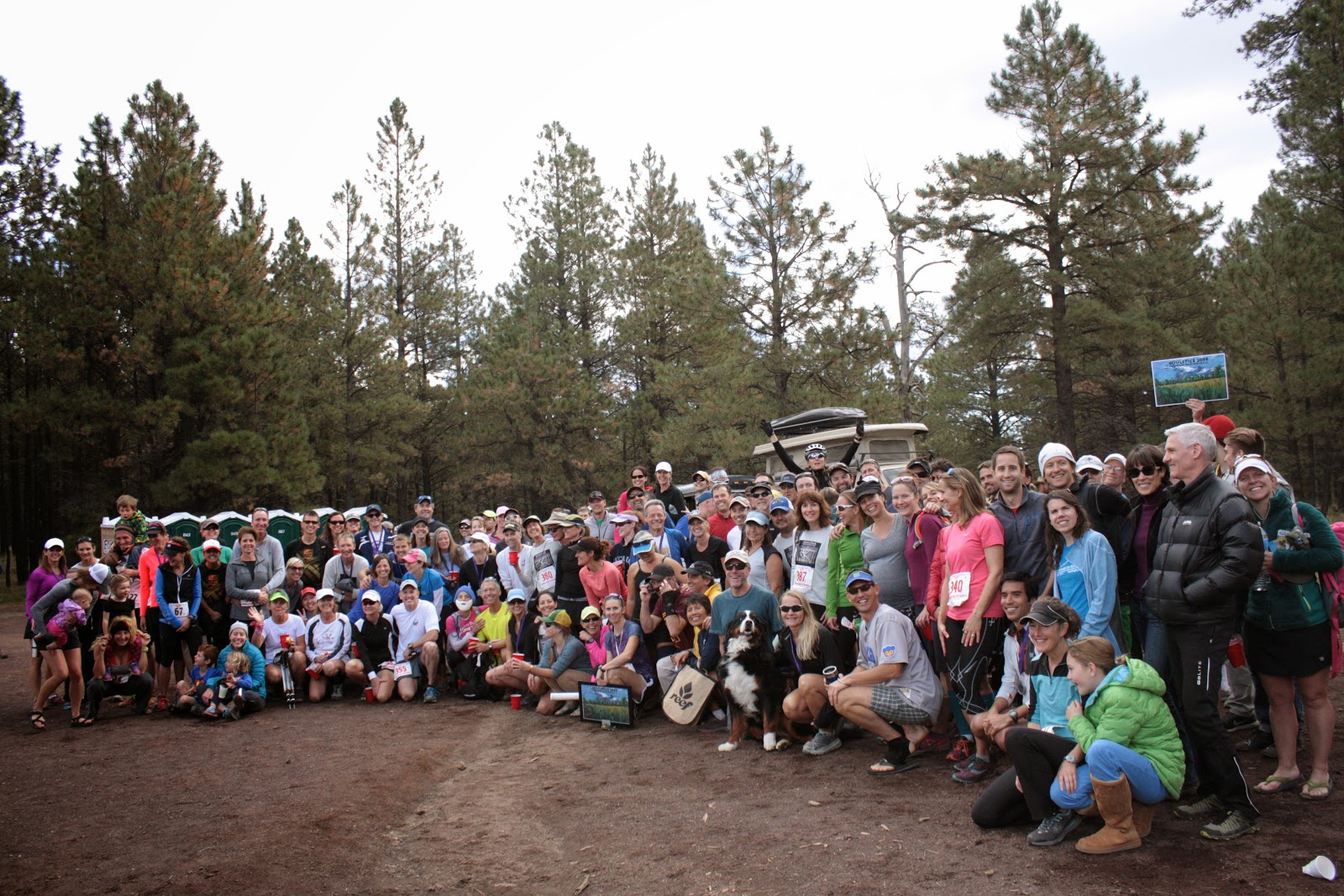 
Behind the scenes, I organized Soulstice quite a bit differently this year. As most of you know, I followed Imogene Pass Run’s no refund/no exchange/transfer policy.   As every year exchanges and transfers increased, my already limited free time vanished. This coincided with a busy field season at work right up until race day. Since I don’t pay myself a dime, simplifying Soulstice reached critical levels. (See Myles Schrag's Arizona Daily Sun column for more) While I heard some grumblings second hand, those didn’t bother me. A simplified Soulstice meant less stress for me, a higher quality event, and Mother Nature obviously did her best to ensure that as well. 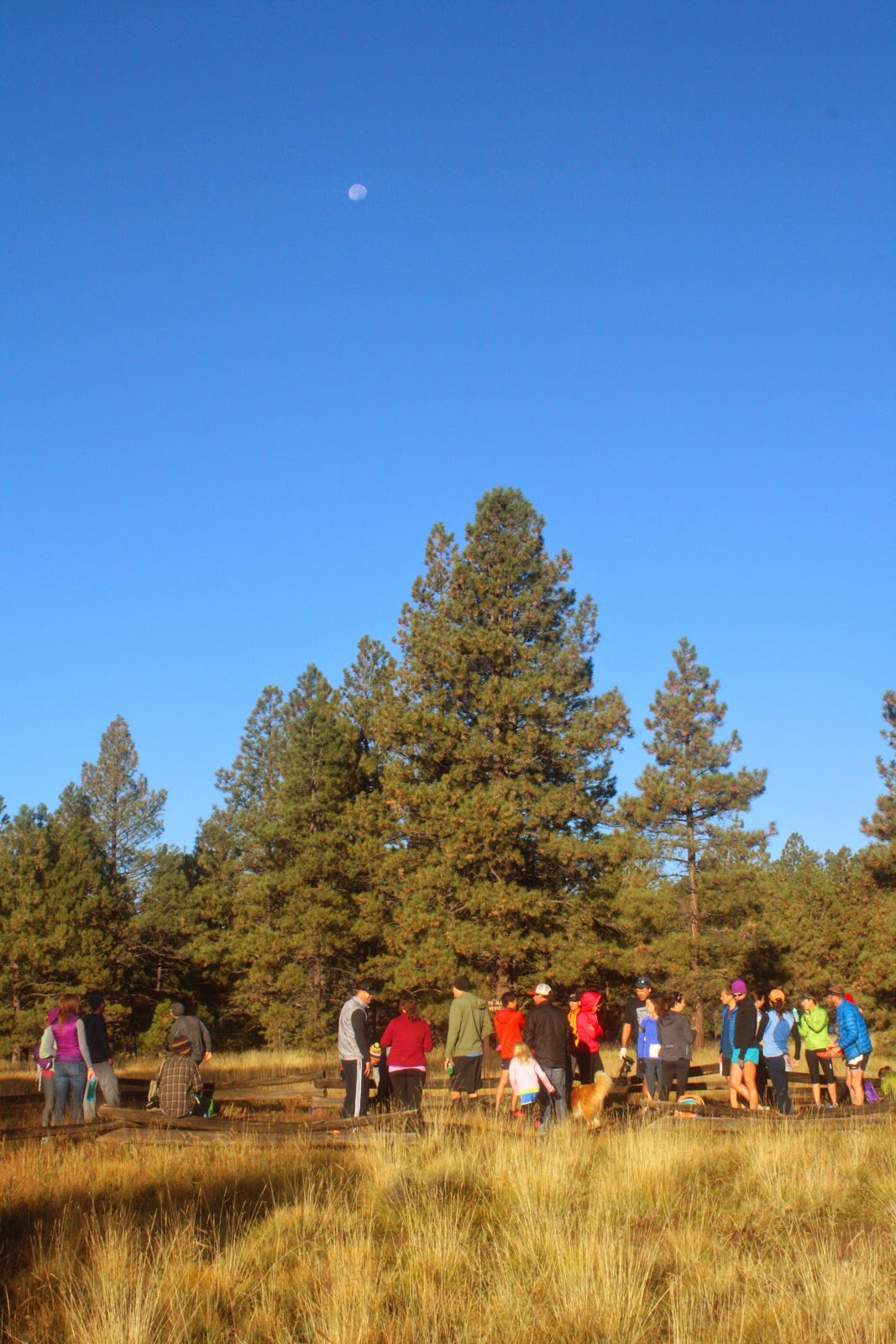 (NATRA photo)
On Friday, thanks to Mark James, Kara Tate, and John Lowe for taking the time to help me flag and flour the course sans blizzard conditions for the first time in three years. Mark and Kara insisted they would volunteer on race day, but after seeing how beautiful the course was, Kara and Mark’s competitive juices kicked into high gear and it was great to see them crossing the finish line. 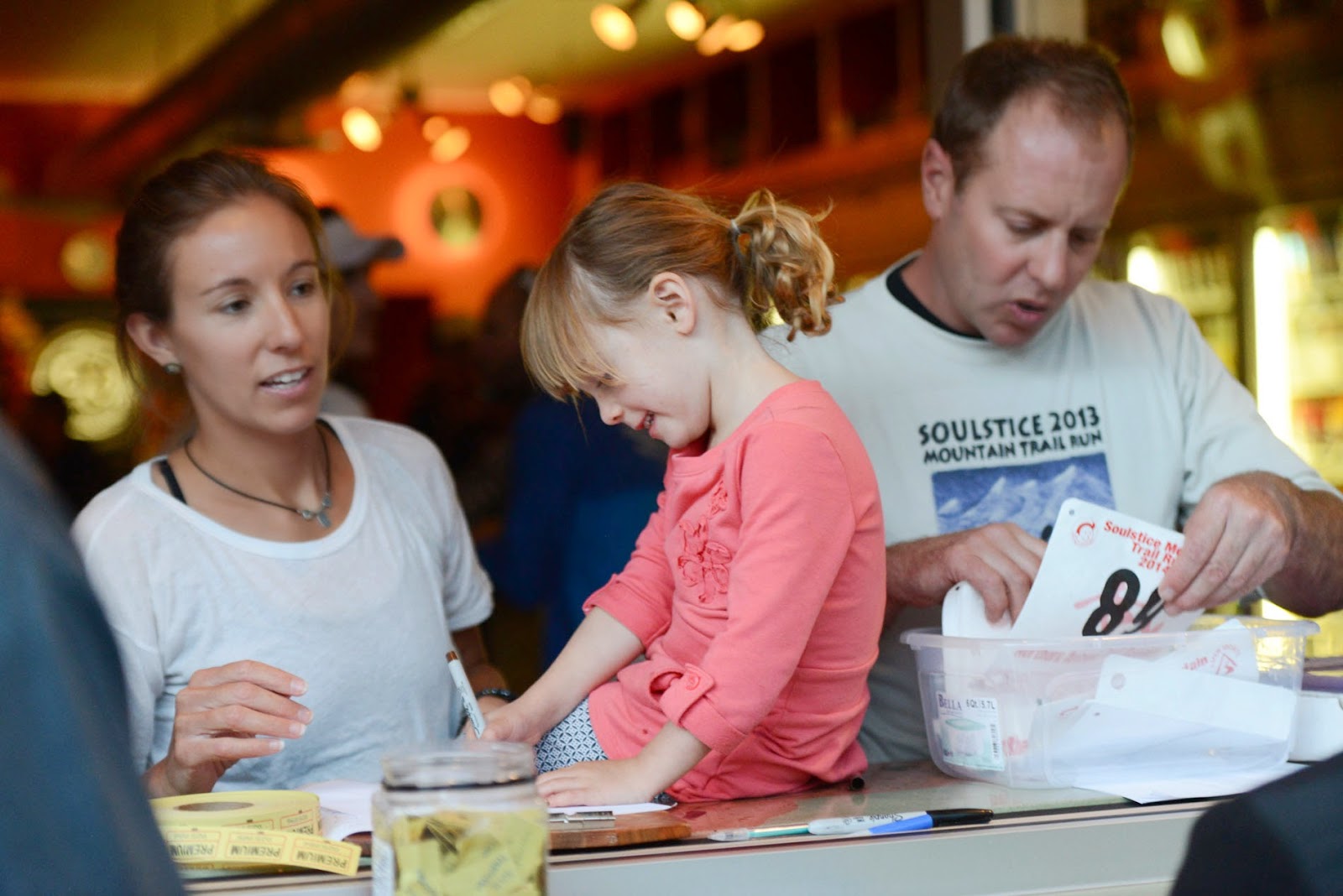 Friday evening, the re-designed Pay n’ Take windows worked out quite well for packet pick-up. David, Diana, Oso, and I no longer have to freeze our butts off outside. Well, Oso wouldn’t care with his heavy coat.  Since I reduced packet pick up to 3 hours rather than 4, we had bigger rush than ever and thanks to Danielle Fazio for saving our hides by stepping up to the plate. 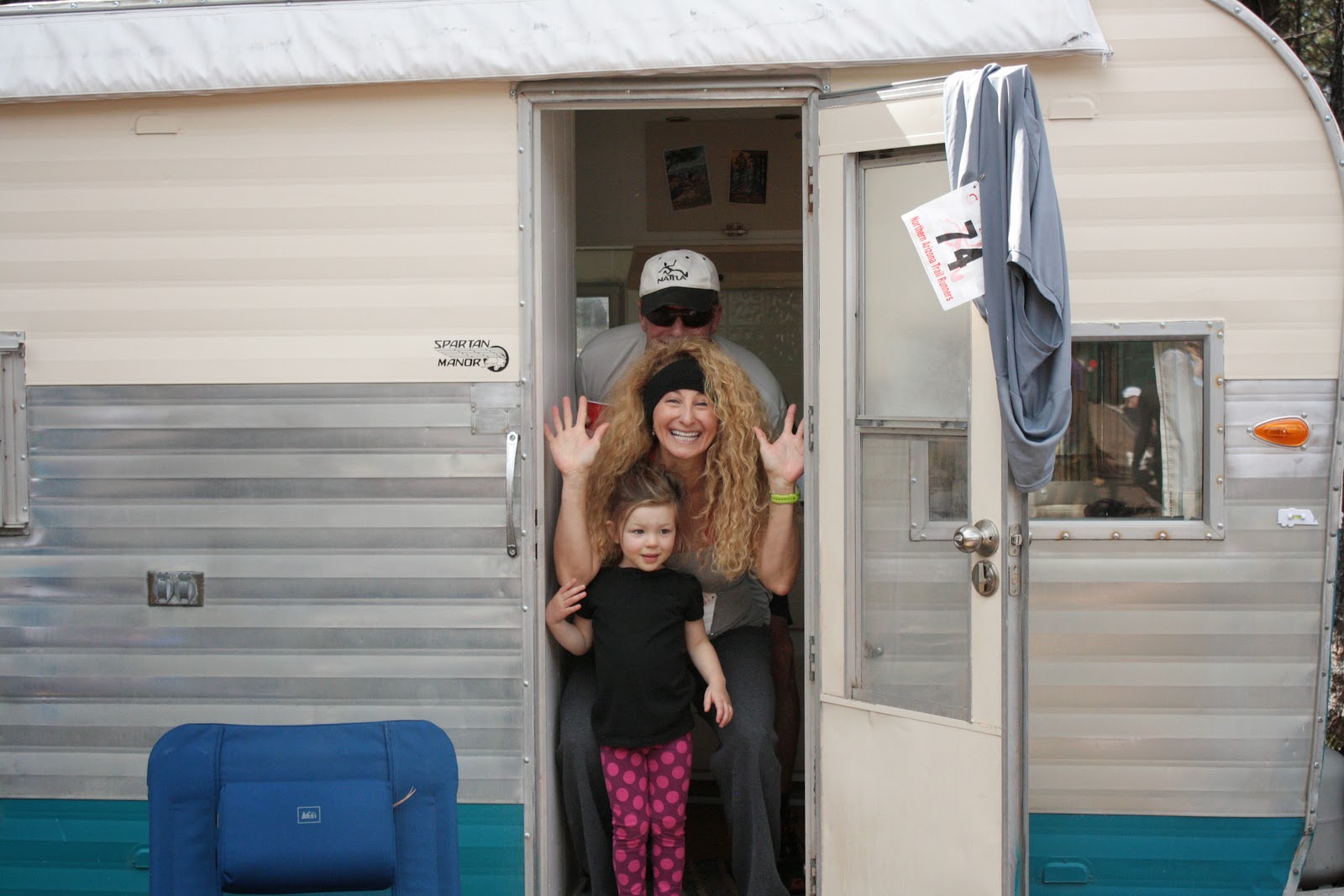 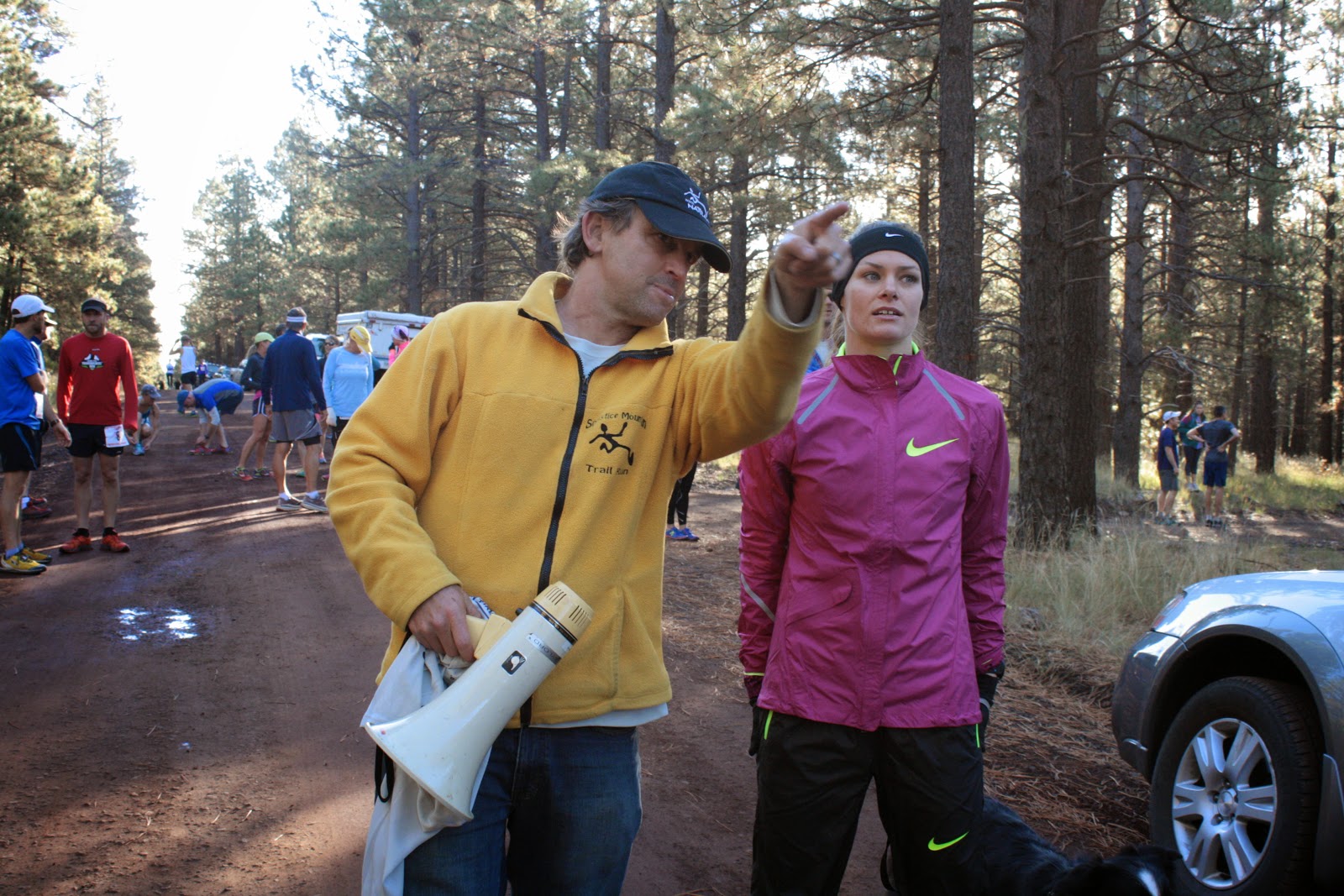 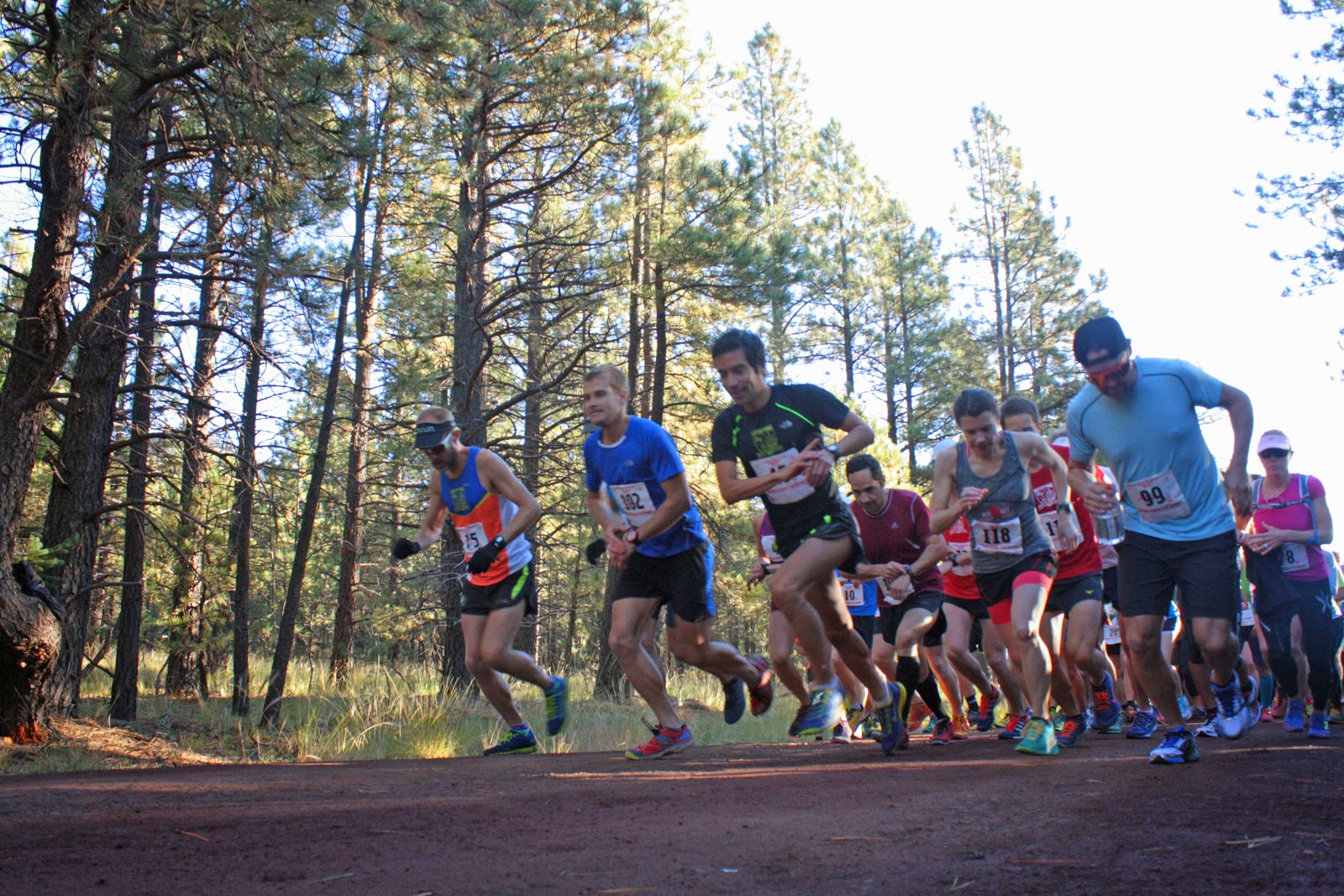 (Cameron Clark photo)
On race day, Coconino Amateur Radio Club has always been our stellar communication support system – they always seem to do whatever they do without a hitch so I never really paid attention to their process. This year I met beforehand with Robert Meadowcroft and gained much appreciated insights. Once again I'm grateful that the Coconino County Sheriff’s Department controlled traffic at the start of the race on the busiest leaf peeping Saturday in years. And of course thanks to the Coconino National Forest  who continues to permit Soulstice on the Dry Lake Hills trail systems. 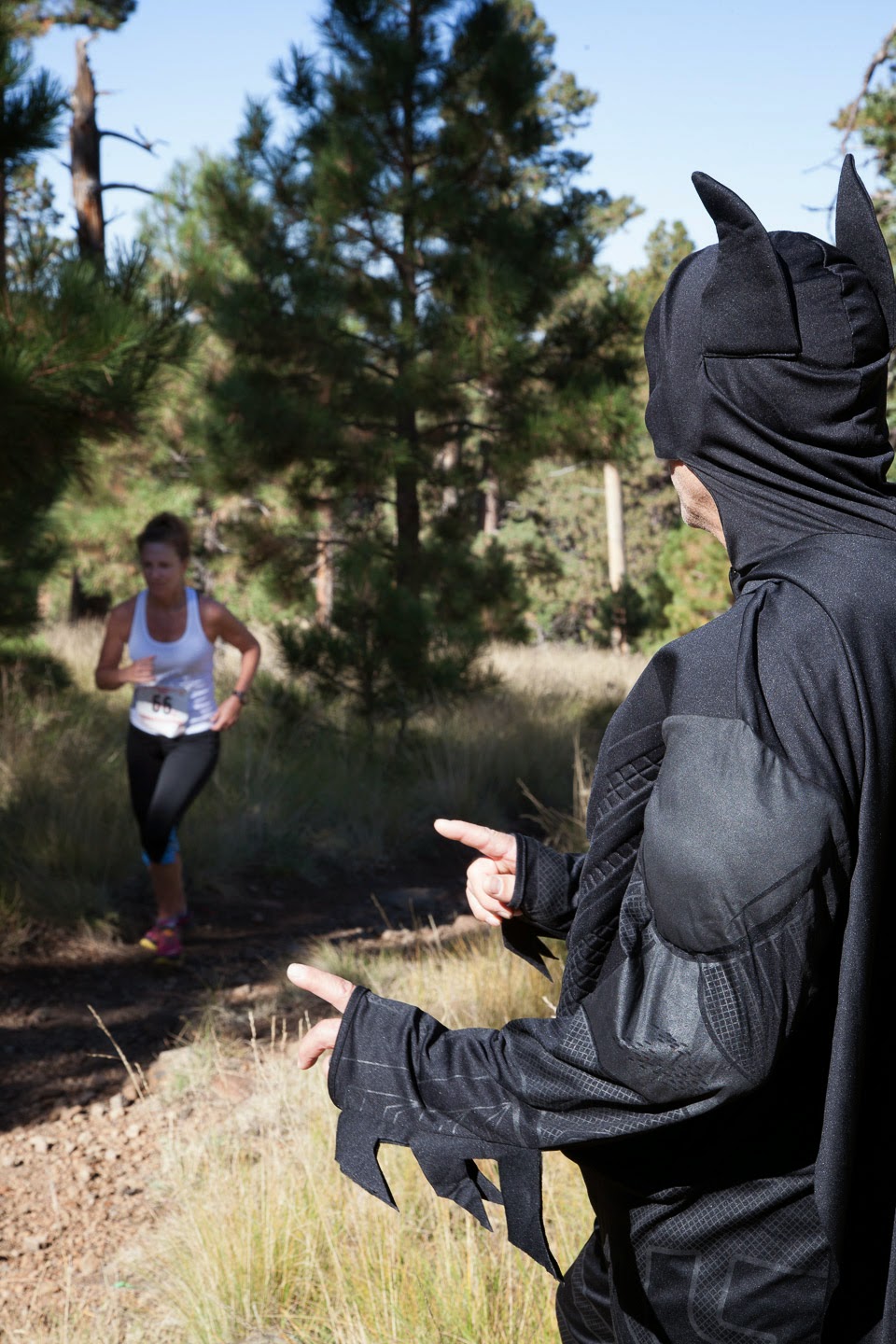 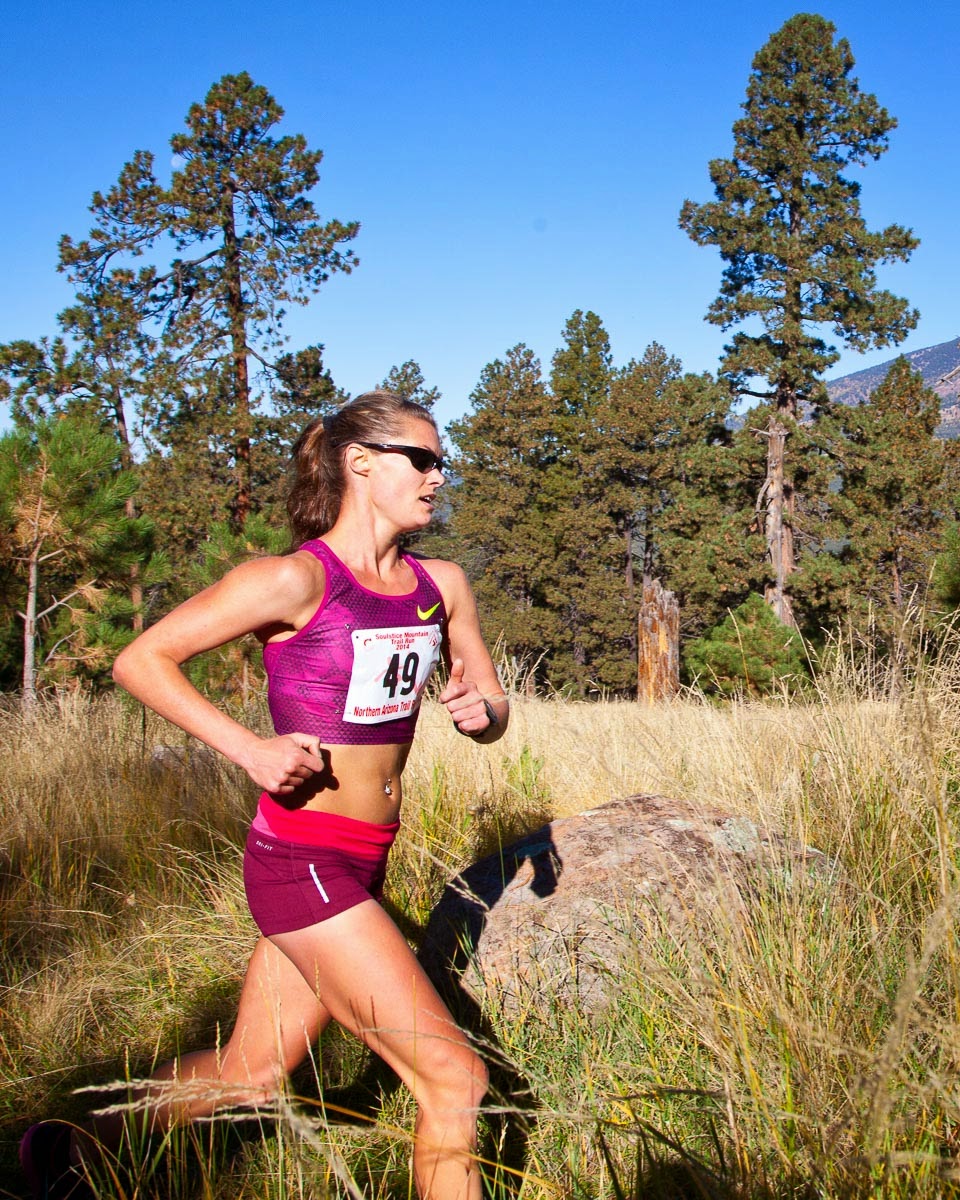 Another key component to the event is the volunteers who year after year show up to do the aid stations atop Sunset and Old Weatherford Trail. Steve Pulos battered his Toyota pickup one more time to ensure the safety of long course runners. Atop Sunset, Batman (Coconino County Supervisor Matt Ryan) and Aaron Devine’s NAU Parks and Recreation Management class hiked the early morning hours with the 10 gallons of water and 4 gallons of Gatorade to Sunset aid station. In addition, this year, a handful of students swept the last 4 miles of the course so that I did not have to clean it up on the Monday holiday. 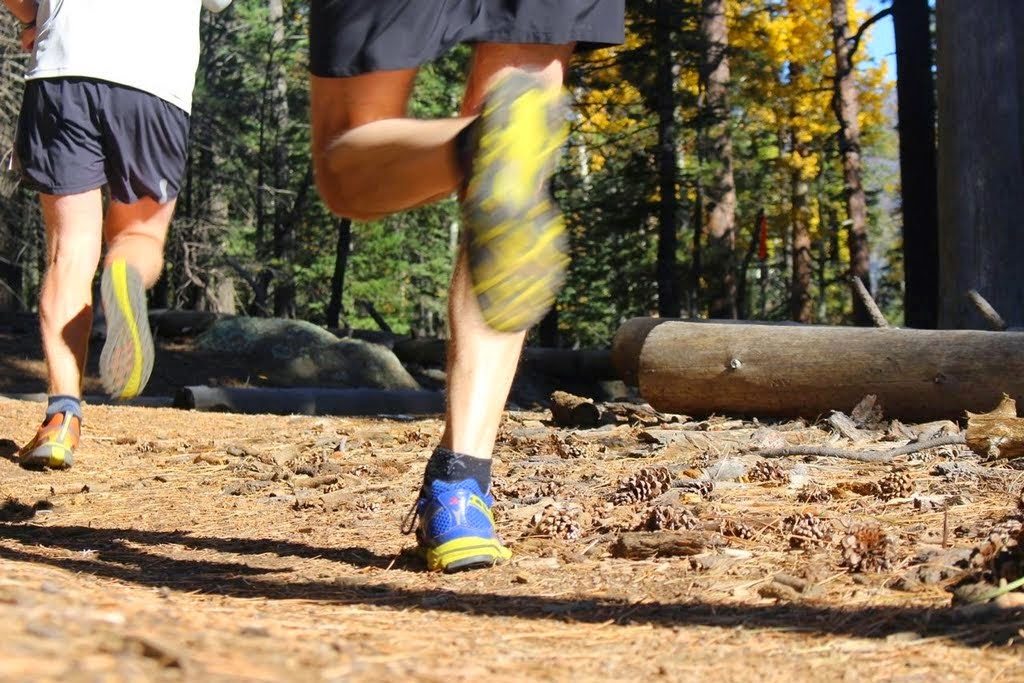 And of course thanks to Jay Carnes and Scott Miller for the great Pay n’ Take party, hot dogs, fixings and salty treats, Biff’s Bagels for the post-race carbs, David McKee for his always amazing art work on the shirt, medals and poster, and of course you the runners, who always bring so much energy on race day. 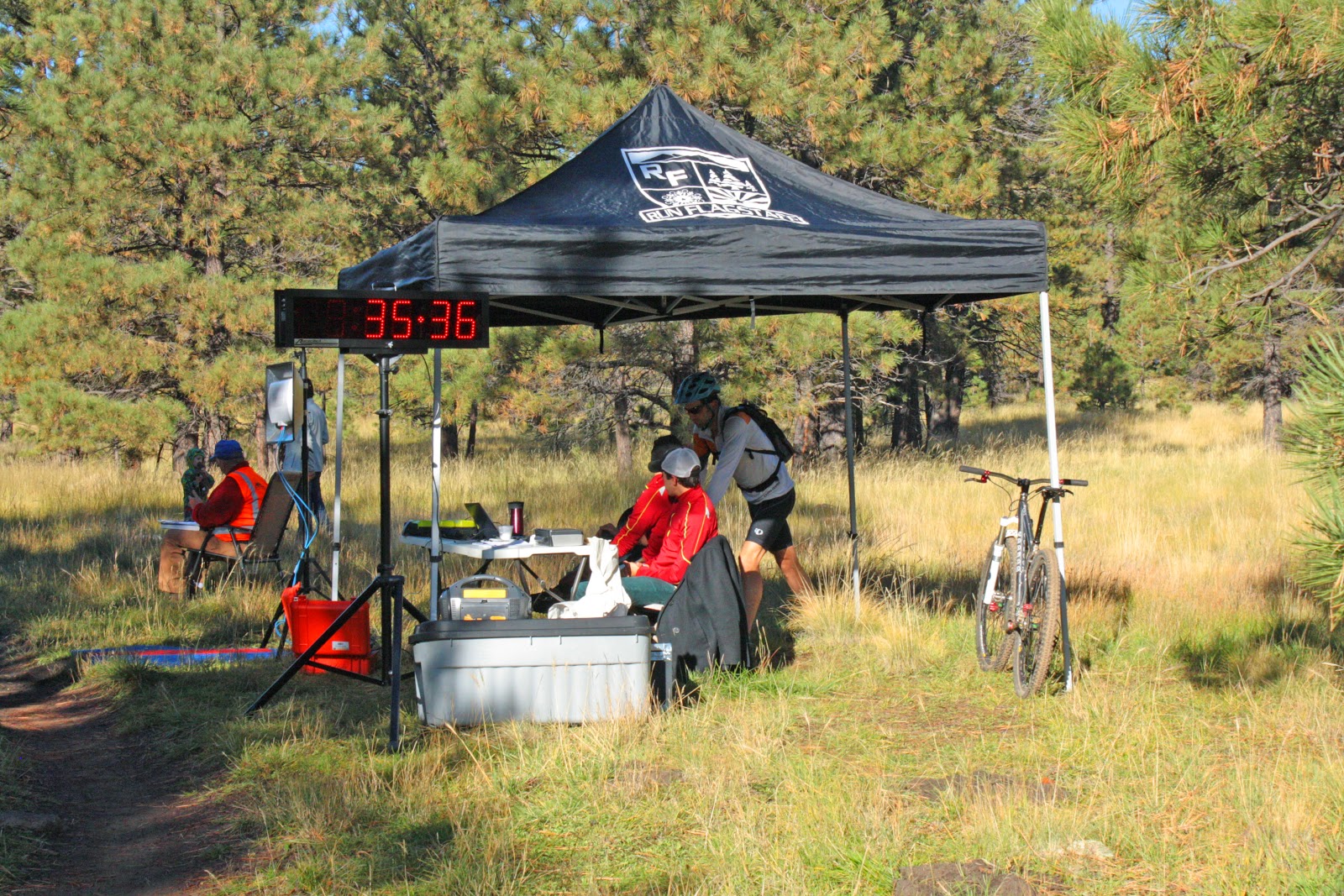 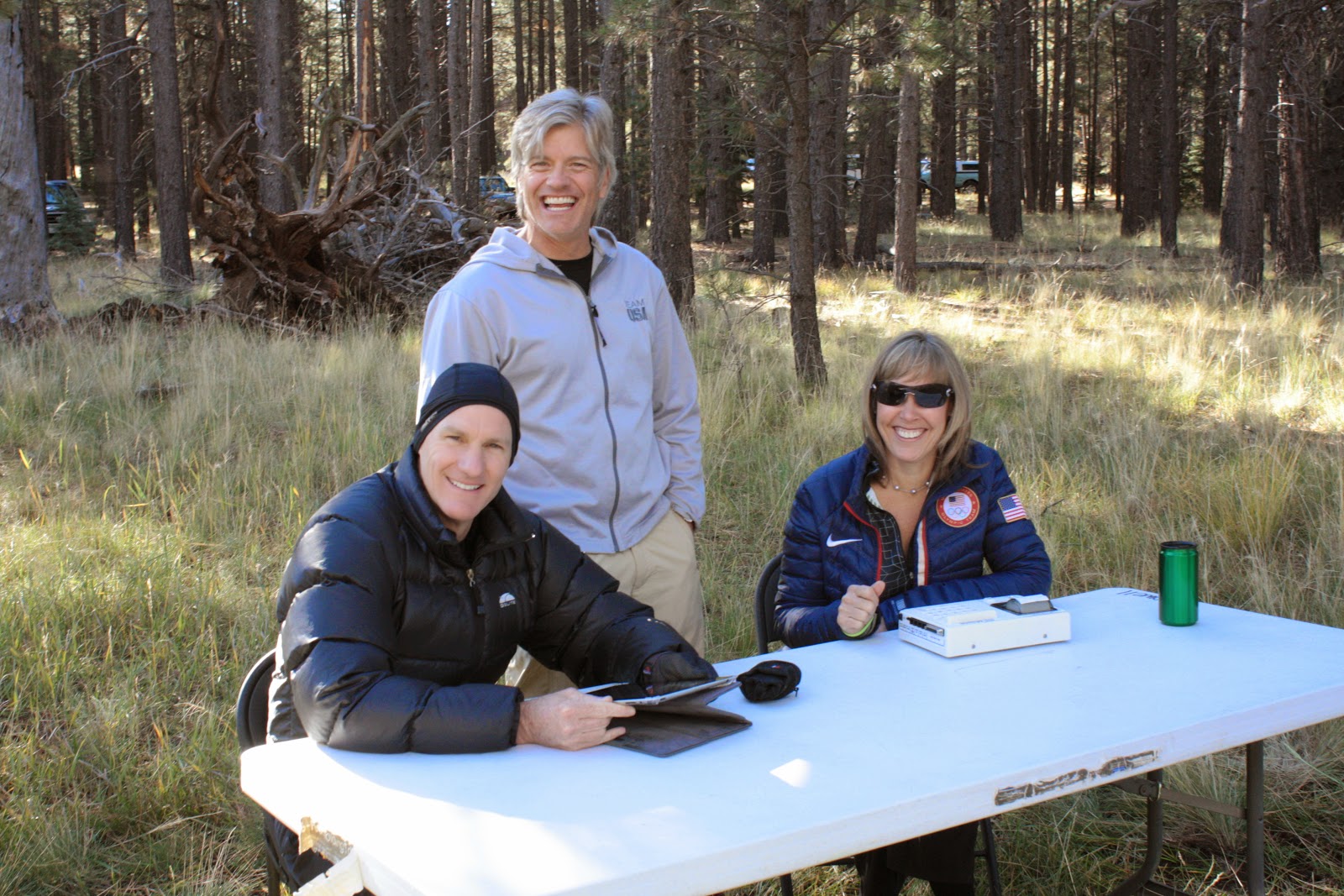 We had chip timing donated by Run Flagstaff, and while we couldn’t post live due to a weak signal, the results were posted correctly around 12 PM, by the time most runners got off the Mountain. As a result, I did not have to spend hours after the race sorting and printing results. Thanks to our back up timers, Alan and Theresa Dowell, and Todd and Stacey Cislo for doing such a stellar job that I was able to get through the awards with greater accuracy than any other year with only two errors in the manual standings. Mark Thurston took 1st place in Mens 50-59 and Susan Spinelli took 3rd in Women’s 50-59. Unofficial results are at http://results.chronotrack.com/event/results/event/event-6823?lc=en 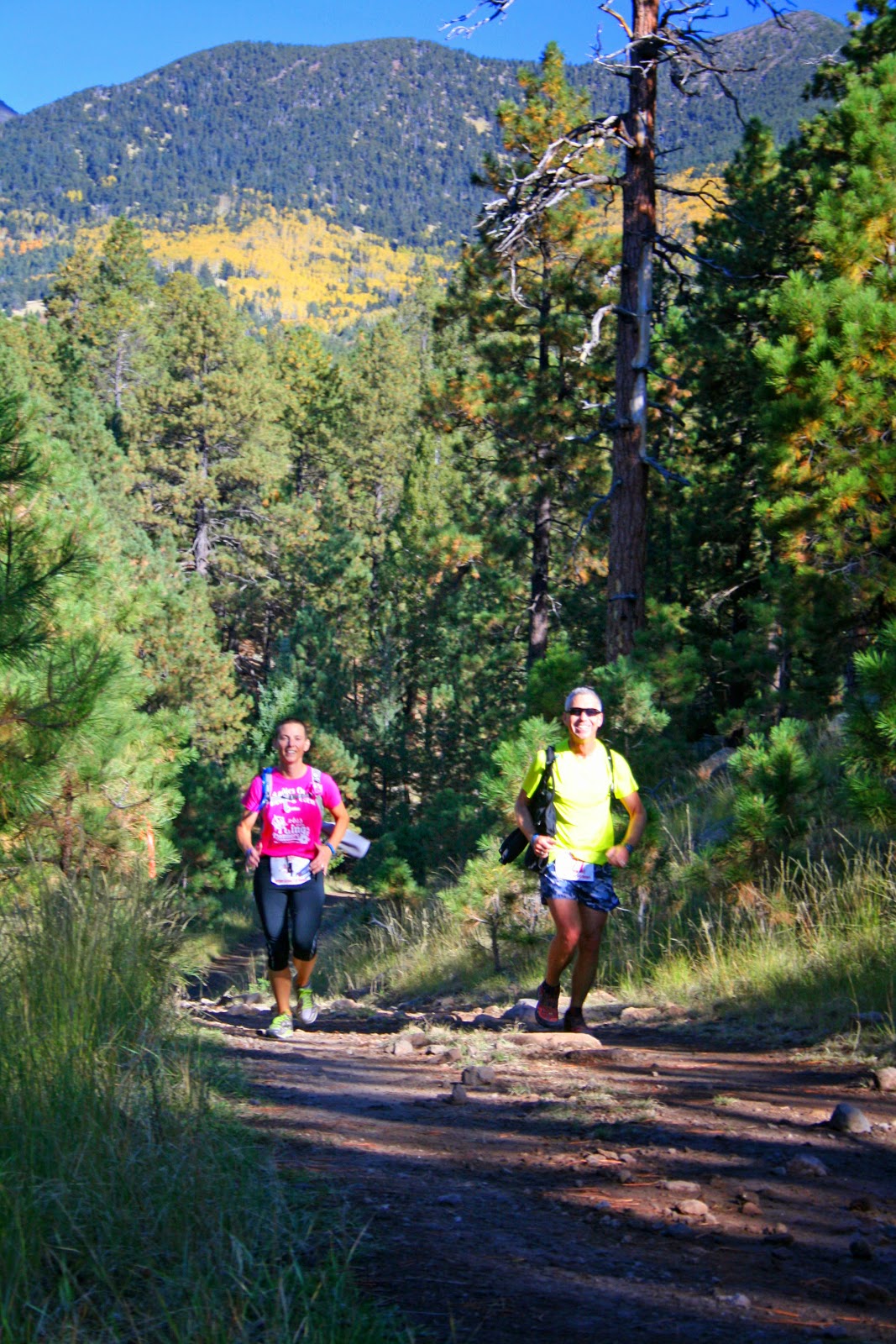 At the last second, we ended up with an amazing cadre of photographers randomly on the course. I think they captured almost every angle of Soulstice. Thank you Cameron Clark of Cameron and Kelly Studios (http:cameronkellystudio.com) for grabbing my camera and capturing the start while I yelled at runners letting them know the race was starting at 8 AM with or without them. Photos by me, John Lowe, and Cameron Clark can be downloaded at https://picasaweb.google.com/112827349870389023562/Soulstice_2014?authkey=Gv1sRgCMSRtI6w5eCZdA; Martos Hoffman took fabulous photos near the top of Sunset at http://www.martoshoffmanimages.com/stock-images/soulsticerace2014; Bret Sarnquist ran all over the course with his photos posted at https://picasaweb.google.com/116731474404317696747/SoulsticeRun2014?authkey=Gv1sRgCIzNrIju_pOXpAE; and Ginny and Josh Biggs have their photo album at https://picasaweb.google.com/112827349870389023562/Biggs_soulstice?authkey=Gv1sRgCPWU8_6WuajbMw – As always, please credit these photographers if you repost or share. 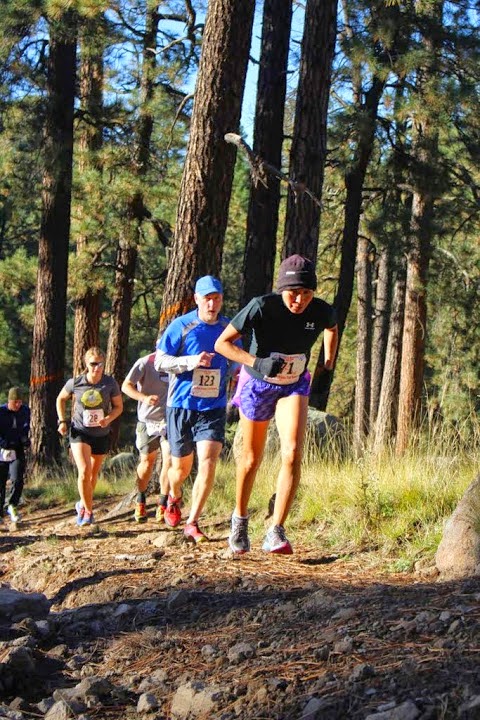 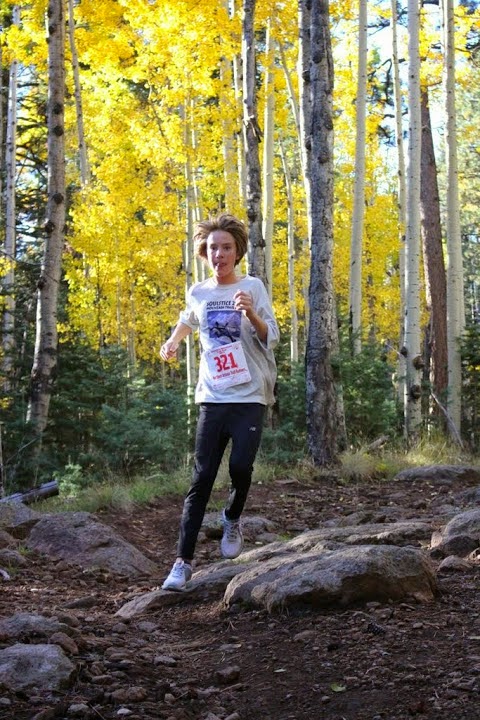 (Bret Sarnquist photo)
Soulstice is all about our community and in my case helping raise money for Big Brothers Big Sisters of Flagstaff. As a board member, a Big in their Williams School Based mentoring program, and director of their epic Half Marathon for the past 13 years, it means the world to me to raise nearly $5000 on behalf of the agency. Thanks to Jerry Mclaughlin and Dave Barnett at Aspen Sports for their amazing raffle  that raised nearly $1600 and to Steve Rhode for emceeing.

We definitely missed having race co-founder and sponsor Paul Brinkmann at Soulstice. He had a good excuse, breaking 12 hours at World Ironman Championships in Kona. Paul was with us in spirit, donning his Soulstice cap across the finish line. Congrats Paul! 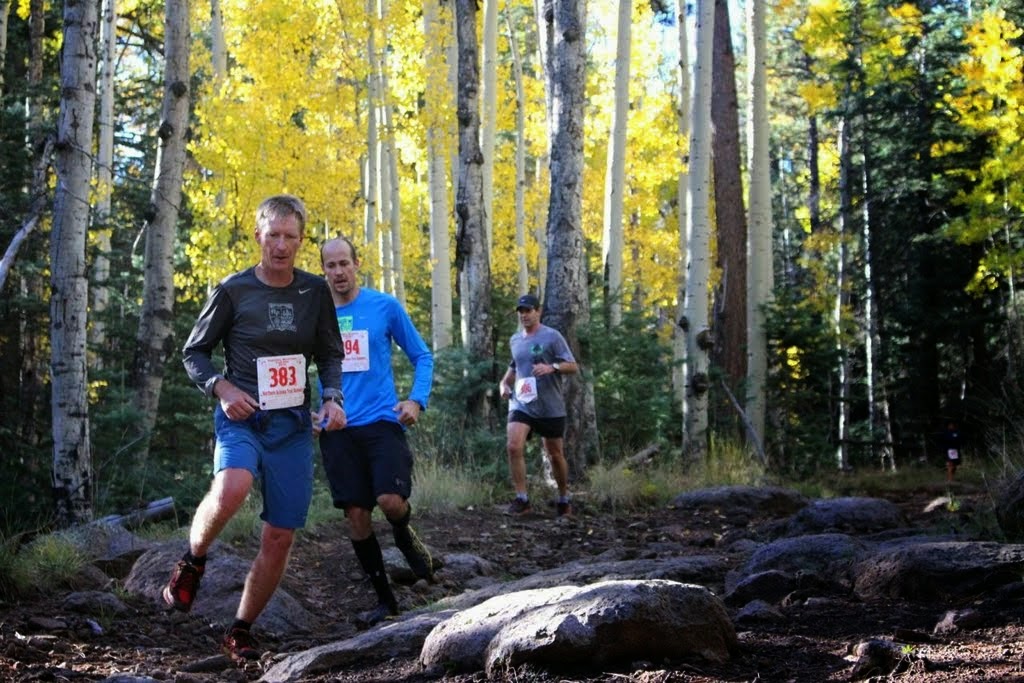 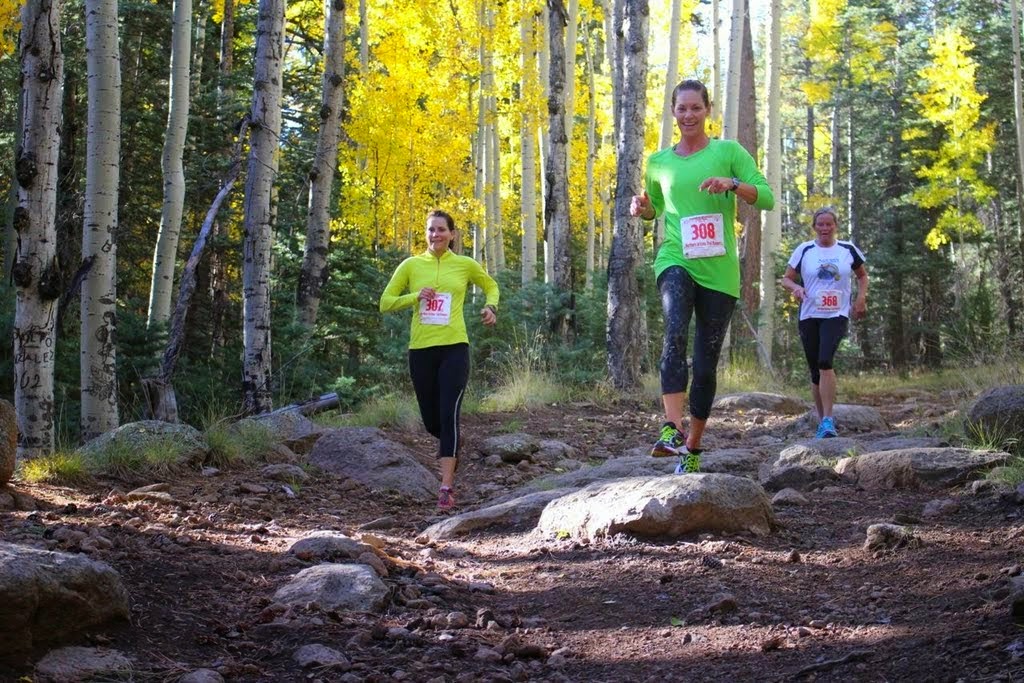 (Bret Sarnquist photo)
In keeping with tradition, Knights of the Soulstice Round Table gathered and kicked around ideas for next year without judgement in front of the benevolent race dictator. The one motion that passed unanimously, was to drop the price of the long course next year to $60 with the short course holding steady at $75. And so it is written. 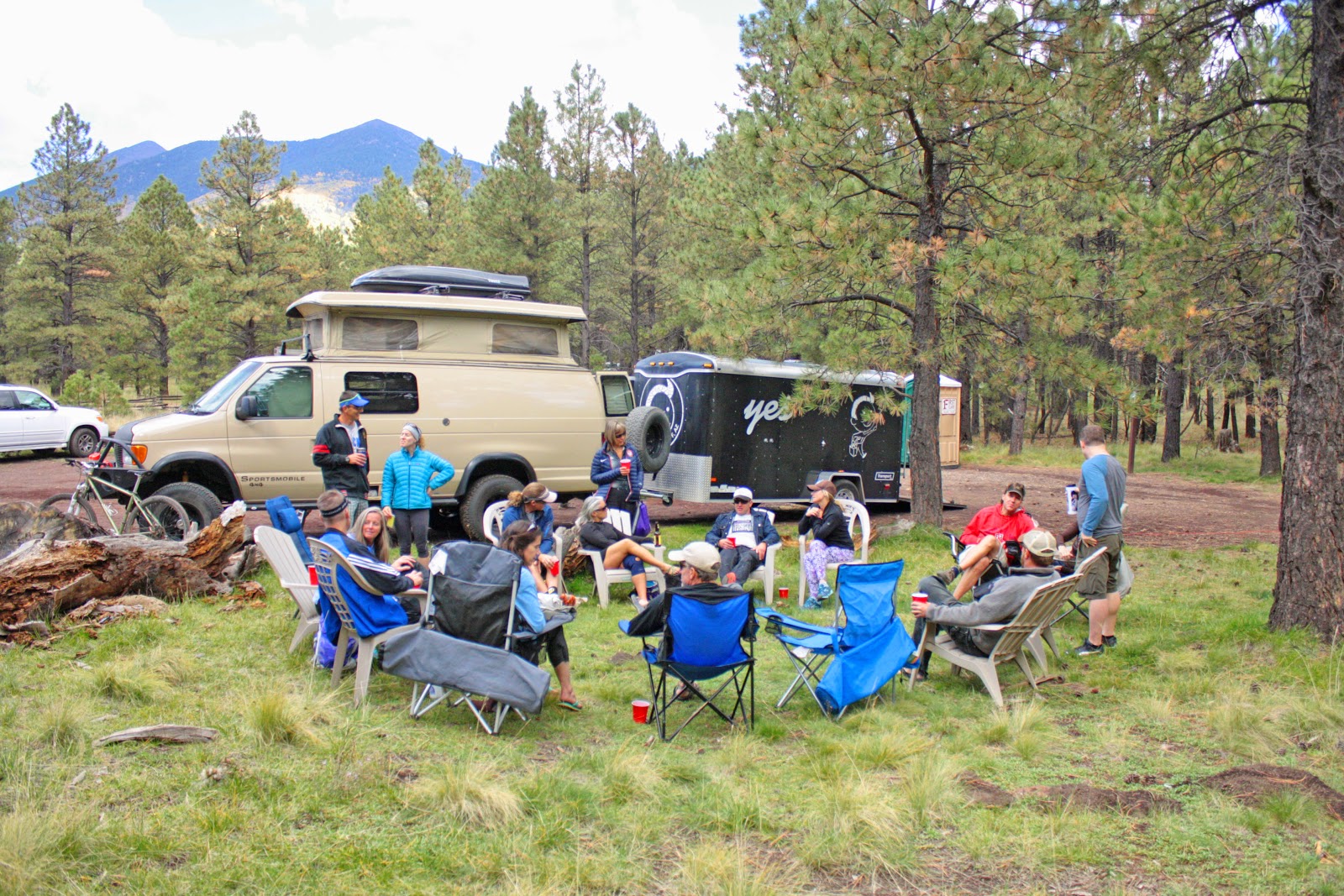 Finally, thanks to all of the runners who brought so much energy and spirit to this race – that is really what made it so special for me. Registration for Soulstice opens January 1, 2015 with the lottery again on April 1st. Hope to see many of you next year for the 16th running.