Today 6 NATRA runners had the pleasure of running with Albie Masland who is running across the country on behalf of fallen heroes and injured veterans. To learn more about Albie's mission, visit Operation Amerithon. We ran from the Flagstaff Athletic Club West across town on the Route 66 FUTS to newly designed trailhead near Fanning Drive, about 6 miles. We also had fun re-creating the Forest Gump scene where Sh** Happens.

This is the fourth time that NATRA has joined a runner crossing the country. All four times, we were the first organized group that these remarkable athletes socialized with since starting on the west coast. All have told fascinating stories about their encounters on the road.


Folks from Flagstaff can have a chance to meet Albie from 12 to 2 on Sunday April 22 at the Kickstand. He will be discussing his fundraising efforts for the Travis Manion Foundation. Runners can also join him Sunday at 8 AM on the new Route 66 Trailhead just past Fanning Drive towards the mall. We will run the stretch from Fanning to the Walnut Canyon exit on I-40 (8 miles round trip). 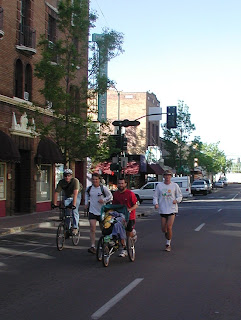 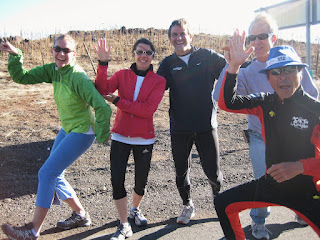 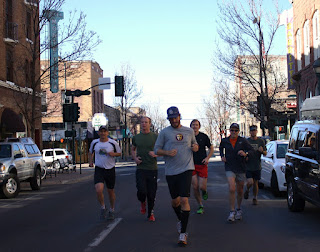 Sabrina, Susan & Bruce climbed Aggasiz last year on April Fools Day. A reprise didn't work out so they kicked around alternatives. Some friends ran this route across the Grand Canyon & back. They thought that was too much, so on On April 18th, they walked it- the third installment of Northern Arizona Trail Walkers Association!  A little less than 24 hours in one's life - except for sore muscles! (Thanks to Bruce H for sharing!)
Posted by NATRA blog at 4:22 PM No comments: