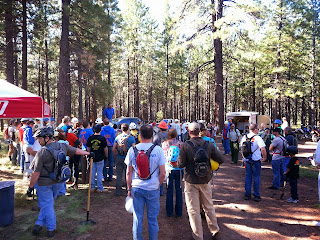 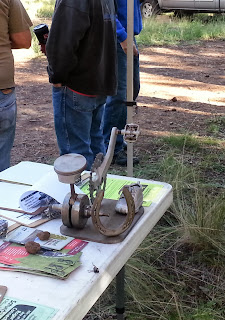 Every year the PPHHB trophy is awarded to the group that brings out the most volunteers. Participants order their favorite activity (from 1-4), but only the 1s count. 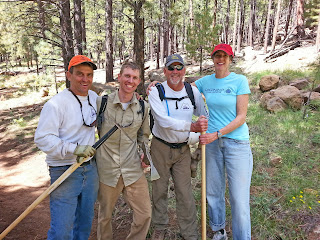 Remarkably, the vote was split and Anthony decided part of the year it would go to the Coconino Trail Riders and the other to Flagstaff Biking. The trail runner's measly two votes could have been powerful swing votes had I realized it would be that close!  To be fair, there actually were quite a few die hard trail runners at the event, however, their first love was mountain biking. Also, this event is held at the same time that hundreds of trail runners are working their lungs at the Flagstaff Marathon, Half Marathon, and 10K. 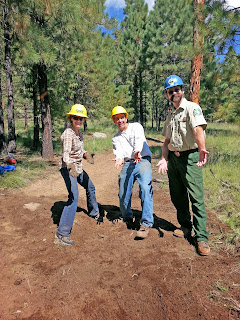 (proud of our outslope drain)

Since the Forest Service has recently closed 1000s of miles of roads to motorized travel, pressures have increased on places for motorized dirt bikes to recreate. Many who breath in oxygen using only foot power have been surprised to find out that the Fort Valley Trail System is open to motorized use. As these user conflicts will undoubtedly increase, many of us who are powered only by our feet, now have several thousand additional miles of dirt roads run and explore that are closed to motorized vehicles. FBO's PPHHB day gives the different trail users a chance to educate each other on the issues while working side by side to achieve the same goal. 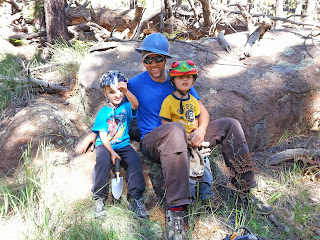 (Best hard hats of the day!)

It was a very educational day, lots of ideas discussed, and thanks to our food donation, everyone had plenty of Fratelli's pizza!

Posted by NATRA blog at 3:05 PM No comments: