An unusually small turnout today for the group run at Sandy Seep. Well for those that missed, you will be surprised to hear that the wind was noticeably absent. Yes, the usual wind blasted run was more pleasant than ever. David, Neil, and Don enjoyed soaking in the rich colors that contrasted with a snow covered Mount Elden. David bounding out front encountered several deer, but could not catch up with any of the elk running just ahead.

We also ran the trail to do a condition assessment on our section of the Arizona Trail and to take photos for the new Arizona Trail guidebook. The trail was certainly in good shape, except where Neil and Don took a wrong turn. So others don't make our same mistake, we built two small cairns where the trail is obviously missing a carsonite post north of Sandy Seep. On the downhill return, Neil stumbled twice taking two spills but managed to protect the camera on his way to the ground. All returned safe and went their separate ways, Neil to patch up his bruises....

Next week we will meet at the parking lot of the Flagstaff West Athletic Club at 8 AM and head for a special run west of Williams, Arizona. We will run to the abandoned 1882 Johnson Canyon Tunnel. Don't miss out on this run back through time!
Posted by NATRA blog at 11:36 AM No comments: 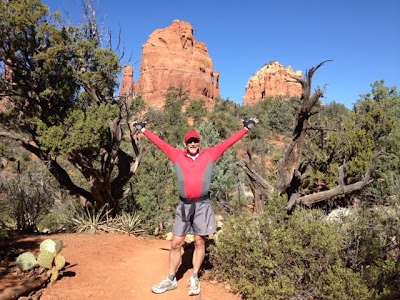 (Thanks to Bruce for the post and Don for the photos!)Jen, Diana, Susan, David, Don, Chris, Sabrina and Bruce avoided the Sedona leprechauns and their odd calendar by moving today's run from Jordan Road to Soldier Pass for the 5+-mile loop that feels like a lot more. Several people decided just jogging this tough loop wasn't enough and added bits to it - a climb up a rock monument, a jog to Dry Creek and back up Brins, a jog in the neighborhood or a jog to the coffee shop 2 miles down the hill. All had a great time and the little people were back under the hill for the year as we departed town. 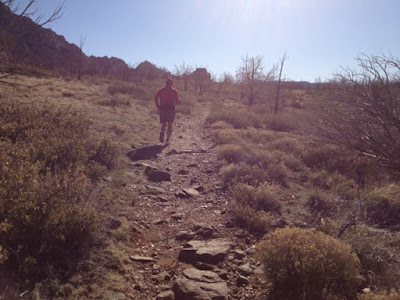 Posted by NATRA blog at 8:06 AM No comments: